Sun, sea, beaches and cocktails. This is the right combination for a good holiday. But what if you don’t like the summer heat? What does Lošinj have to offer its numerous guests in low season? If you ask Mr Duh, his answer will be: 250 km of peace. 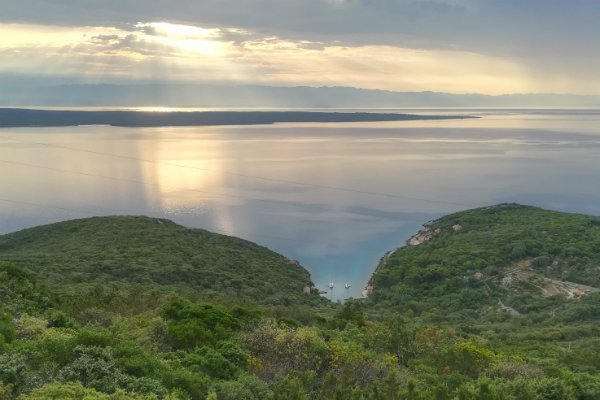 Lošinj has more than 250 km of walking and hiking trails, ranging from recreational low-difficulty paths to more challenging mountain trails that offer fantastic views of the island. They are also perfect places to unwind, restore your peace of mind, and feel at one with nature. Combined with fragrant workshops and relaxing treatments with local medicinal herbs, a stay on Lošinj shines with a new, autumn splendour.

A climb up Mount Osoršćica is always a special experience. Those who do it will be rewarded with a view that in fair weather stretches all the way to the Apennines, across Istria to the Dolomites and Julian Alps, to Mount Risnjak and Gorski Kotar in the Kvarner hinterland, to the northern Adriatic islands, and to magnificent Mount Velebit, taking in its entire length. Even if you don’t know the names of the individual peaks that you see, you’ll be delighted with the view. The green hills of the island of Lošinj stretch in out front of you towards the invisible border between the sea and the sky, creating the impression that you’re observing an oil painting on canvas. The Austro-Hungarian heir to the throne Rudolf Habsburg admired this beautiful sight when he climbed the 4.5 km path to the peak of Televrin (588 m) back in the year 1887.

How can you reach the peak? Climbing a mountain might sound frightening, but here on Osoršćica this is a feat that can be achieved by young and old, and active and passive climbers. All you need is goodwill and some good advice. Mr Franci Duh, president of the Jakob Aljaž mountaineering club from Slovenia, explained to us how he started hiking on the island of Lošinj, gave us some advice and told us a few anecdotes from the extensive experience that he has collected over the years that he has been climbing the peaks and discovering the trails on Lošinj. 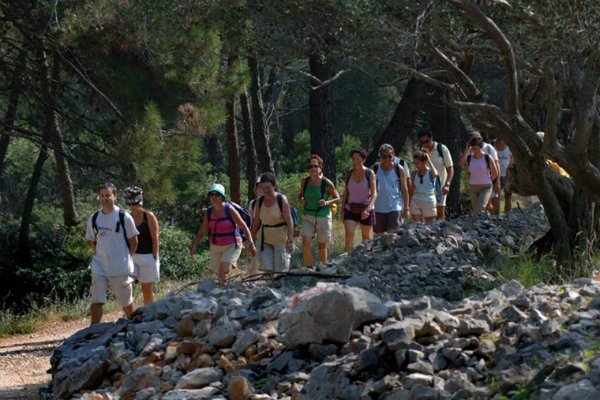 Hello Mr Franci! For starters, could you tell us how long you have been mountaineering?

I’ve been a mountaineer for many years, and it all started spontaneously here on Lošinj. When I was younger, I used to play football, and later on I was a coach at a football school which we used to bring to Lošinj for training. On one occasion, we were looking at Osoršćica and asked ourselves: ‘Why not climb up there?’ This is how it all started. Later I quit football because of my age, but there’s no age limit for hiking and mountaineering. Now I’m active doing this.

Where have you been mountaineering so far?

I have climbed many mountains in neighbouring countries and the Tara region, as well as numerous peaks in Montenegro, the whole of Slovenia, south and north Velebit, and many more. On the islands of Lošinj and Cres, I’ve been literally everywhere.

How long have you been visiting Lošinj for your summer holidays and why do you choose our island and the Hotel Aurora?

I first came to Lošinj back in 1982 and have been coming back ever since. In those days, me and my football team were accommodated at the Hotel Bellevue. During my later visits with mountaineers, I stayed in all the Lošinj Hotels & Villas properties – the Hotel Aurora, Hotel Bellevue, and Hotel Alhambra – and we liked them all. Now I spend every holiday here at the Hotel Aurora. I know all the hotel staff and we work together well. Now that you ask why I come here, the answer is simple – because it’s so beautiful!

How did your hiking adventure on Lošinj start? Do you have some trails that you particularly like?

It all started with the simple idea of taking a walk around the island. While I was still visiting Lošinj with my football school, I heard that the Slovenian skier Bojan Križaj used to train on Mount Osoršćica, because Lošinj has a beneficial climate and air that are perfect for athletes during training. For this reason, I started exploring the island’s trails, and later on I met Mr Bolt Gaberšek from Osoršćica Mountaineering Club, with whom we organised the first group that we took on the route Hotel Bellevue-Balvanida-Sveti Ivan-Veli Lošinj and back by boat. This was the first trail that I went on with my group of hikers and mountaineers, and later we explored all the trails that exist on Lošinj and Cres.

These are all good trails; each one has something special that attracts and delights visitors. I still manage to find something new or something that we do for the first time. For example, a few days ago we had a ‘Full Moon Walk’ with 25 participants. We started at 9:30 pm, walked around the cove of Sunčana Uvala and admired the reflection of the Moon on the surface of the sea. It was amazing!

You have been to Osoršćica many times. What’s the feeling when you reach the peak?

Osoršćica has a particular charm and offers fantastic views from its peak. To climb a peak is always a great satisfaction for every mountaineer, and even more so when you are rewarded with such a view. 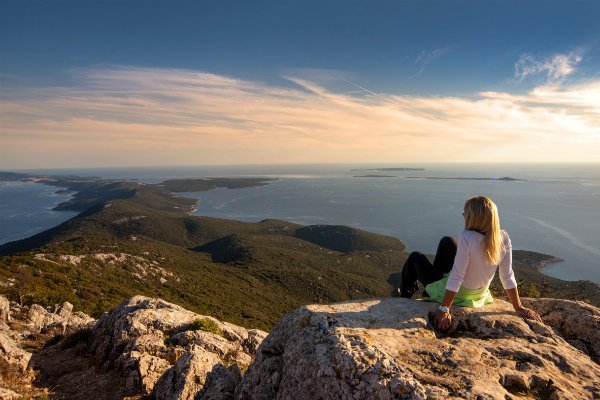 Osoršćica also has several caves, such as the St Gaudentius Cave. Have you been there, and do you know which legend is associated with this saint?

Yes, of course. Saint Gaudentius was a bishop of Osor from Tržić, a village close to Osor, whose inhabitants banned him from the town due to various conflicts and his preaching. He found refuge in a cave on Mount Osoršćica, and legend has it that he then banished poisonous snakes from the island forever. Today, there are indeed no venomous snakes on the island of Lošinj, and there is no scientific explanation for it. The St Gaudentius Cave is quite close to the peaks of Sveti Mikul, which is home to the Chapel of St. Nicholas, and also Televrin, the highest peak of Osoršćica (588 m). The trail that leads there is more demanding, actually not so good, but still feasible. Where there’s a will, there’s a way.

What’s the reaction of people who visit Osoršćica for the first time? Do they forget the demanding ascent once they reach the peak?

Every hiker or mountaineer who wants to climb a peak knows exactly what to expect. They know that it isn’t anything like walking down a street. Each climb is challenging in its own way. However, of all the people I have taken to Osoršćica, no one has ever given up. And once they reach the peak, they all forget the effort and just enjoy the view.

Which time of the year is best for discovering the trails of Lošinj in your opinion?

The best months for hiking and mountaineering are definitely February, March and April, because later in the summer it gets too hot. September and October are also ideal, with temperatures between 15-20 °C like now, although this year we have had very warm and even hot days in September. But regardless of this, you can hike on Lošinj all year long thanks to its mild climate. I always say that a mountaineer must count on both warm weather and rain, as well as all other weather conditions. When I was opening a trail towards Punta Križa with a group of mountaineers, it was raining heavily, there was frost, and some parts were even flooded – but we still went. Once you start, there is no quitting or returning, because something inside you makes you continue on your way and complete the route.

Do you have any advice for those who have never been hiking or who are now preparing for their first excursion?

Although every hiker or mountaineer should know what to expect, we have had cases of people who came in inappropriate shoes or clothing. One has to be well-prepared and respect some basic things, such as protecting oneself from the sun, wearing good shoes, using walking poles, and taking enough water to drink.

Is there an anecdote about your hikers that you remember well and that you’d like to share with us?

There’s always something interesting going on. I’ve been coming here for a long time and I’ve been in every kind of situation. I remember a case when a lady that was in my hiking group never actually went hiking with us. We would start in one direction, and she would take another. I asked her if there was a problem, and she answered cheerfully: ‘Mr Duh, I like it here so much!’ When she was about to return home, she told me: ‘I’ve lost 10 kg here – not physically, but mentally’. She obviously just needed her own peace and quiet. She would simply walk, sit and enjoy herself. This is precisely what makes this island so special. Everybody enjoys Lošinj in their own way. 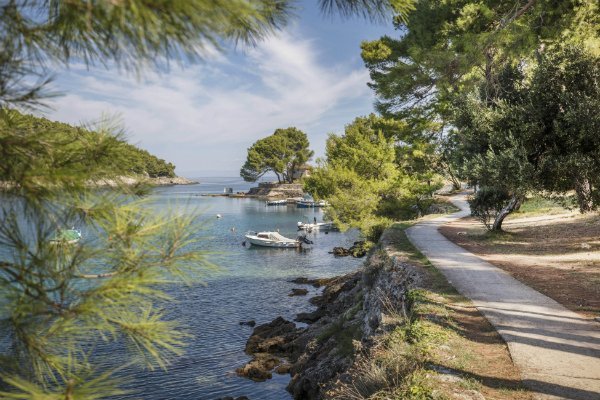 Pack your backpack, put on a good pair of shoes, and dare to explore something new – your reward will be greater than the effort you’ve made.